This is a report back from the SFUSD Ad Hoc Student Assignment System Committee meeting November 29, 2016.

At a moment when President-Elect Trump is talking about “making America great again” there’s a surprising way that San Francisco is closer to the 1960s than 2016. Our schools are as segregated now as they were in 1968, before the NAACP won a series of desegregation orders. The order was lifted in 2005, and in ten short years we’re back at civil rights era levels of segregation. Weird and a little shocking, for San Francisco, right?

Last night’s Ad Hoc Committee on Student Assignment meeting could be a part of undoing the systemic racism that leads to segregation in our schools. It started out on a frustrating path, but turned in a hopeful direction. What happens next will determine if San Francisco takes the position you would expect of a progressive city, or whether we maintain our little piece of the 1960s in our schools.

The presentation ran models of what diversity would look like under neighborhood schools.

As Commissioner Walton pointed out, “choice is fundamentally inequitably distributed.”

The second half of the presentation focused on other approaches districts take to integrate their schools, including a look at Berkeley’s zone model. 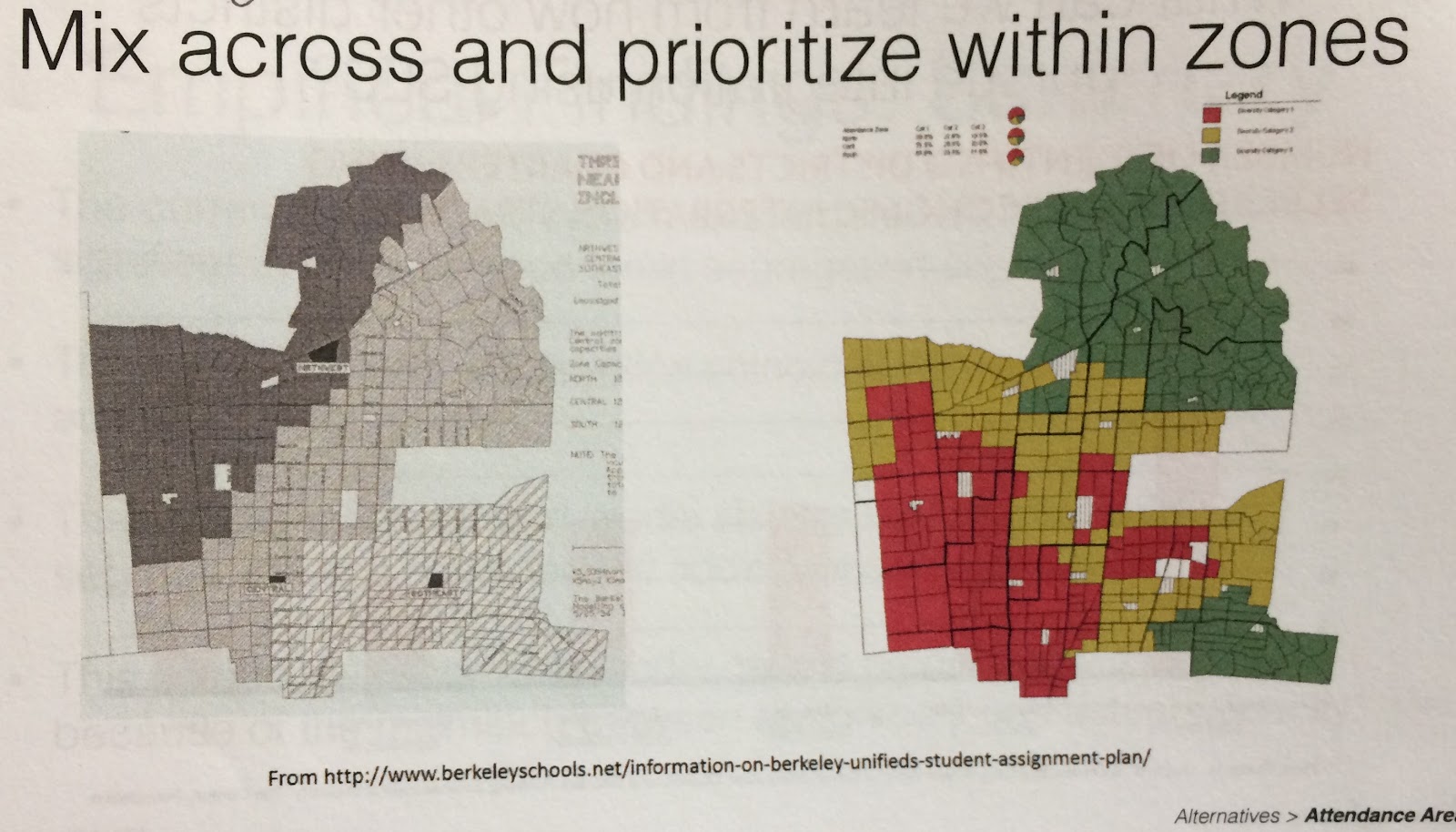 A really positive moment came when staff noted that schools and districts which have achieved integration set specific goals and targets.

Will SFUSD do the same?

There was limited parent participation, maybe partly because as one parent testified, the meetings and materials and recordings have not been posted publicaly, despite several requests. However, all the parents who testified called on the district to use the SAS process to integrate schools, which seemed to have a powerful impact!

Commissioners were really responsive to feedback and asked staff to follow up on on getting information up online, getting a promise that materials would be up on the website the next day. Commissioner Norton and others articulated that they are not making a proposal that SFUSD move to a neighborhood school assignment system. Commissioner Haney said current levels of segregation are completely unacceptable and that we have a moral imperative to reduce racial isolation. Commissioner Walton turned this sentiment into action by asking staff what it would take to run models of different strategies with a goal of integration, and asking if we could bring in outside partners to help.

Will we do it?

It will take real leadership and consistent work to change from a system with 1960s levels of segregation to an integrated school district. Any changes made this year, or even next year would take 5+ years to roll out, since enrollment for families currently in schools wouldn’t change, changes would only happen for families applying in the future. The real proof will be in what happens next, and what the follow up is. Some of the Ad Hoc Committee on Student Assignment materials are up on the website which is a good start.

The most important moment of the night was probably Commissioner Walton’s call to shift the question we are getting data on from “What would it look like if we had neighborhood schools” to “What student assignment system would best integrate our schools?”

It would be great to see models of how other systems would work in SUFSD. There’s a district very close to home which successfully integrated their schools & whose approach we should model. In this district, there was only one segregated school, test scores rose for all students, and the achievement gap closed.1 This district was SFUSD in 1997! We shouldn’t forget that we actually had integrated schools at one point, and should model past SFUSD systems side by side with what other districts are doing right now. Enrollment even crept up in the 1980s when we started using a system where every school had to have 4 racial groups represented, and no more than 45% of the students could not be from the same group. For the very nerdy, check out this really important footnote about federal law and guidelines, blah, blah, blah ;).2

Some of the best news in this process is that, it looks like the district shifting to create more equitable dynamics  by working more closely with Black families on enrollment. The EPC (enrollment) came out to an AAPAC meeting to talk with Black families about their enrollment experience. AAPAC will be presenting on March 8th about their experience with segregation and the school assignment system. This is really important progress, compared to the 2014-15 report which spent pages and pages on the question “How can parents get into Clarendon” and just had a few short paragraphs wondering why most Bayview families didn’t attend neighborhood schools with no follow up. Hopefully the district will continue to make sure that this makes families who are most hurt by segregation partners in this process, working closely with groups like Coleman Advocates, AROC, Support for Families With Disabilities, La Voz Latina, Our Family Coalition, Chinese for Affirmative Action, Au Co and other groups organizing and/or serving marginalized families.

At the end of the presentation, staff pointed out that “Diversity in school assignment is not enough.” It’s a starting point, not an end point. They reminded us that meaningful integration must also include an “Integrated school climate, equitable discipline, culturally responsive curriculum and pedagogy, diversity and desegregation among teachers, and within-school integration: detracking.” We have to be careful to ensure that we are integrating our schools, not gentrifying them.

Integrating our schools will take courage, curiosity, participation, elbow grease, data, persistence and leadership from families, staff, and Commissioners. Fortunately, last night we saw all the ingredients come together. The real question will be what happens now, whether the next steps fall into place, and we are able to send our students to schools which will prepare them for the America they will graduate into, not the one we (hopefully) left behind in the 1960s.

1 – From court documents in San Francisco NAACP v. San Francisco Unified School District “Academic achievement data indicate a close relationship between resegregation and the disparity in academic achievement between black and Latino students in comparison with white and Chinese-American students. The overwhelming majority of schools that have been successful in closing the achievement gap, as indicated by the large percentages of students of all ethnic backgrounds who score at the proficient or above level on state standardized tests, have maintained ethnically and racially-diverse student bodies (Biegel Report No. 22 (2004–05) App. 1 at 2). In contrast, the Academic Performance Index (API), a school-ranking system based on standardized test scores, indicates that schools with declining APIs are those that have become resegregated.” https://www.clearinghouse.net/detail.php?id=9939 (p. 12)
2 –  Federal guidelines for public schools looking to integrate say that districts should look at three different options for integration and chose the one which will meet the goal of integrating schools in the most tailored way. The three ways are “race neutral” (our current “choice”/lottery system – fail), generally race conscious (like Berkeley’s zone system), or individually race conscious (SFUSD in the 80s, when schools had a rule that they had to have 4 racial/ethnic groups represented, and no group could make up more than 45% of the student body). We’re fortunate to have examples of these strategies in our district and/or next door, which should give us really good data to answer the question of what enrollment system will actually integrate our schools. In terms of bringing in the leading experts on school integration to help us, it would be amazing if SFUSD asked the nationally recognized school integration experts at the UCLA Civil Rights Project/Proyecto Derechos Civiles to help us figure out the right model for us and to negotiate legal issues.
Posted in Uncategorized Tagged with: assignment, integration, lottery, policy, Schools, segregation